There are many different types of buildings all throughout the world, and occasionally a building is built that captivates a city or even a nation. Over time these buildings become the defining pinnacle of the greatness of the city they improve the skyline of. This is a list of buildings that the world wouldn’t be the same without. 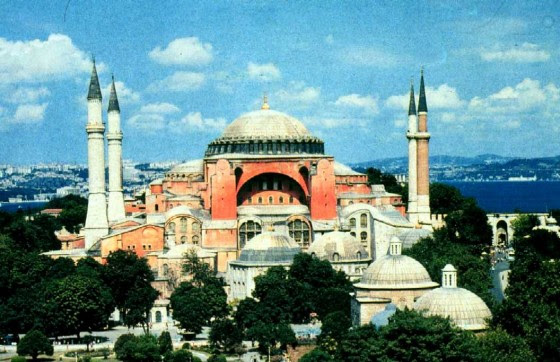 Built on the site of a 4th century church, of which nothing remains, the Hagia Sophia has been a focal point in Istanbul (formerly Constantinople) ever since. The great church is now a museum but it wasn’t always so: for centuries it served as a pillar of the Greek Orthodox Church and then as an Islamic Mosque. The second church was destroyed by a fire during the Nika Riots in 532, although remnants of it can still be seen today. The Hagia Sophia that can be seen today was built between 532 and 537 and is one of the greatest surviving examples of Byzantine architecture. The biggest draw to the ancient church is the impressive 102 foot diameter dome which reaches 182 feet into the sky. Other stunning characteristics of the Hagia Sophia are the countless mosaics, the Loge of the Empress, the Marble Door, the Sultan’s Lodge, Mahmut I’s Library and the Marble Jars.

Who built it?
The first church was built on the spot where a pagan temple had stood, by Emperor Constantine himself in 360. In 405 the second church was built by Constantine’s son, Theodosius II. The third and final Hagia Sophia was built by Justinian in 532. In 1453 Sultan Mehmet II conquered Constantinople and turned it into a mosque, and subsequent sultans have made various additions since then. 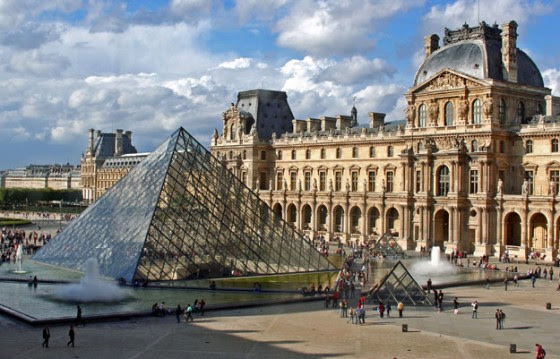 One of the most easily recognizable museums in the world, the Louvre’s Palace and the recently added glass pyramid are as beautiful to those who visit as the priceless works of art that it houses. But it wasn’t always a museum, it was originally built in the 12th century as a museum but in the 14th century it was converted into a royal residence. In 1750 Louis XV turned it back into a royal museum to house parts of the royal collection. During the French Revolution it underwent another transformation, this time from royal to public museum. Throughout the years it has been added to by Napoleon I and restored by Louis XVIII and Charles X. Today the Louvre holds 380,000 pieces; 35,000 of which are on display, including such important works as The Mona Lisa and The Venus de Milo.

Who built it?
Philip II built the Louvre Palace as a fortress somewhere between 1190 and 1202, although most of the original structure has been destroyed. The Salle Basse (Lower Hall) is all that remains of the Medieval Louvre. 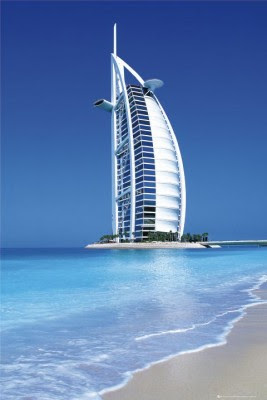 In a city famous for its architecture, the Burj Al Arab defines the Dubai skyline. The newest building on a long list of architecture built on a grand scale, the Burj Al Arab was built in 1994 and is one of the most luxurious hotels in the world. Perched on a man-made island in the Persian Gulf, it was built to mimic the sail of a dhow. The hotel features a 590-foot tall atrium, a large seawater aquarium, two restaurants (one of which was voted in the top 10 restaurants in the world by Conde Nast) and 202 luxuriously appointed suites.

Who built it?
The Burj Al Arab was designed by Tom Wright and built by Atkins for Jumeirah Hotels and Resorts. It is currently the second largest hotel in the world. 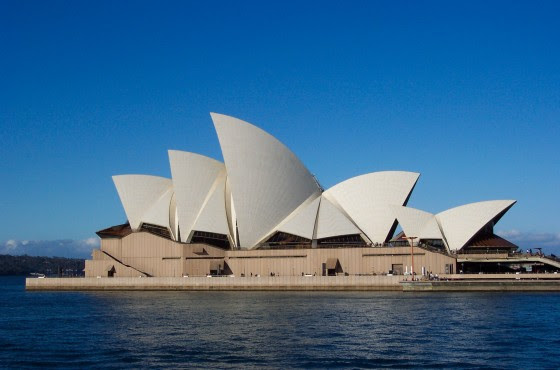 Rising out of the Sydney Harbour, the Sydney Opera House is not only the center of the arts scene in Australia but also stands out as a must see to anyone visiting the area. In the late 1940′s Eugene Goossens, the Director of the NSW State Conservatorium of Music lobbied for a new venue for large productions. In 1955 a design competition was held by NSW Premier Joseph Cahill, and by 1958 construction had begun. The winning design features several concrete shells and houses performance spaces like the concert hall, the opera theater, the drama theater, the studio, the Utzon room, the forecourt as well as a recording studio, five restaurants, four souvenir shops and a guided tour operation.

Who built it?
The winning designer was Jørn Utzon, an architect from Denmark. When Cahill insisted on radical changes to the design, Utzon resigned mid-construction and the project was finished without him. In the 90s, the Sydney Opera House Trust reconciled with Utzon, naming him a design consultant for future work but he died in November of 2008. 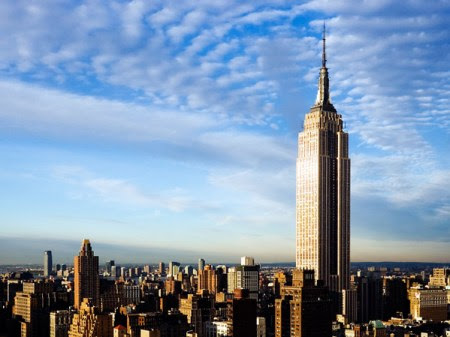 Once the tallest building in the world, no film or television show set in New York is complete without including a shot of the grand Art Deco skyscraper. Originally the site of the Waldorf-Astoria, construction of the Empire State Building began on St Patrick’s Day 1930. 410 days later construction was finished and it won the title of world’s tallest building, surpassing both 40 Wall Street and the Chrysler Building, which were being built around the same time. The opening of the building coincided with the Great Depression so it sat almost empty for the next 20 years. This wasn’t the only challenge the building has had to face: there was a 1945 plane crash, shootings in 1997, and more than 30 suicides. Through it all the Empire State Building has endured as a timeless monument of New York City. 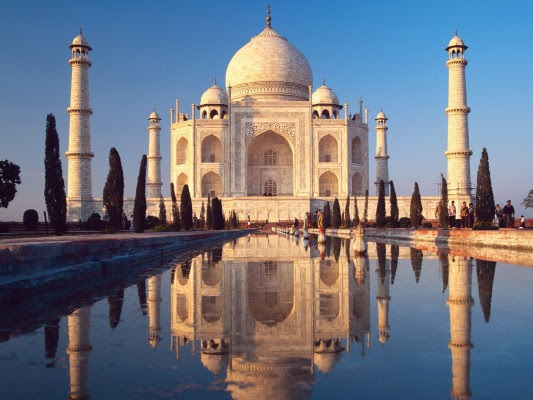 The crowning jewel of India, the Taj Mahal is a testament to one man’s love for his wife. It looks like a palace, but it was actually built as a tomb for the Emperor’s favorite wife. Construction began one year after her death in 1632 and the mausoleum was completed in 1648 with the surrounding buildings and gardens taking another five years to complete. The construction took 20,000 workers and craftsmen that were recruited from all across northern India. Soon after the Taj Mahal was completed, the Emperor was deposed by his son Aurungzeb and put under house arrest. When the Emperor died in 1658, he was buried beside his wife inside the Taj Mahal. During world War II the Indian government erected scaffolding around the Taj to mislead German and Japanese bomber pilots. Today the Taj Mahal is under a different threat: acid rain and pollution from the Mathura Oil Refinery has begun to turn its white marble yellow.

Who built it?
The Taj Mahal was built by Mughal Emperor Shah Jahan when his third wife Mumtaz Mahal died while giving birth to their fourteenth child, Gauhara Begum. He exchanged a large palace in the center of Agra with Maharajah Jai Singh for the three acres of land where the Taj now sits. 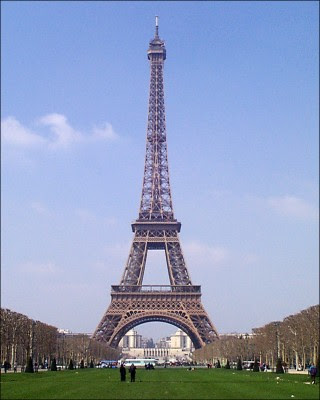 Towering high above Paris, the Eiffel Tower was built between 1887 and 1889 and acted as the entrance arch for the Exposition Universelle, which marked the centennial of the French Revolution. The tower was only supposed to stand for 20 years but it was a valuable communication tool and remained as an unmistakable element of the Paris skyline (especially as buildings in the city cannot surpass seven stories). During the German occupation of Paris during World War II, the lift cables were cut forcing German soldiers to climb the stairs to the top to hoist the swastika. Within hours of the Liberation of Paris, the lifts were back in working order.

Who built it?
The Eiffel tower was designed by engineer Gustave Eiffel who had originally submitted the design to Barcelona for the Universal Exposition in 1888 but they refused. When it was built, he engraved the names of 72 French scientists, engineers and other notable Frenchmen. 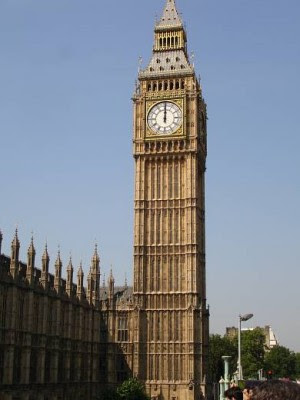 One of the world’s most famous clocks, Big Ben is actually the name of one of the bells but over the years it has come to be used for both the clock and the tower as well. It was completed during the restoration of the Palace of Westminster in 1858. The tower stands 316 feet tall, each clock face is 23 feet square with 4 foot numbers and the great bell is seven and a half feet tall and weighs 13 tons. Nobody knows exactly whom Big Ben is named after but common theories include Sir Benjamin Hall (who oversaw the installation of the bell) or English Heavyweight Boxing Champion Benjamin Count.

Who built it?
Charles Barry designed Westminster Palace, however, Augustus Pugin created the clock tower. Pugin fell into madness and died in 1852 and Big Ben was the last building he would ever design. The clock itself was designed by Beckett Denison. 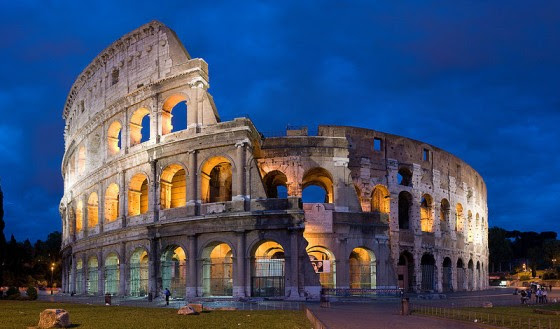 The largest Roman amphitheater ever built, the Colosseum is one of the greatest architectural feats ever achieved by the Ancient Romans. Construction began between 70 and 72 AD and was finished in 80 AD. It was capable of seating 50,000 people and was usually used for gladiatorial games, but could also be used for public spectacles, mock sea battles, animal hunts, executions, reenactments of battles, and dramas based on Classical Mythology. During the medieval era its entertainment purposes ended and it has since been used as housing, workshops, a fortress, a quarry, quarters for a religious order, and a Christian shrine. Today the Colosseum is one of the most popular tourist attractions in Rome and attracts thousands of visitors every year.

Who Built it?
The Colosseum was imagined by Emperor Vespasian who used the vast treasure seized during the Great Jewish Revolt in 70 AD to fund its construction. It was built up to the third story when Vespasian died in 79 AD, but his son Titus finished it and inaugurated it in 80 AD. 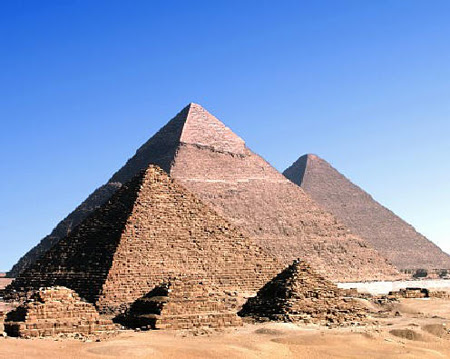 The oldest buildings on this list, the pyramids on the Giza plateau have intrigued mankind for centuries. Not only have they stood the test of time, but the accuracy with which they were built is impressive even by today’s standards. They were built as tombs for three separate pharaohs during the Third and Fourth Dynasty. It is also the only surviving wonder of the ancient world and was the tallest building in the world until 1300 when it was surpassed by the Lincoln Cathedral. Despite their long history, or perhaps because of it, mysteries have swirled around the pyramids since they were found by the Ancient Greeks thousands of years ago. How were they built? How many people worked on the project? How long did the construction take? What was the Egyptians’ understanding of astronomy, mathematics, and geography? And even crazy questions like: did aliens help in their construction? While these questions go unanswered, all we are left to do is marvel at a culture who were master builders even before the invention of the wheel.

Who built it?
The oldest and largest of the three pyramids was built by Khufu between 2551 and 2531 BC. The second was built by Khufu’s grandson Khafre between 2558 and 2532 BC. And the third pyramid belongs to Khafre’s son Menkaure and despite not knowing the exact date of the construction many believe that it was finished somewhere around 2490 BC, several years after his death.

Posted by ArtfulMind.BIZ at 6:21 AM